CrossFit is Not AntiFragile

I’ve seen a few proponents of CrossFit try and claim because of the randomness of the daily workouts (WOD) that they are following the principles of Antifragile. For those unaware Antifragile is a book written by Nassim Taleb describing a state for which we do not have a word in the English language. Fragile means something easily breakable. Not fragile means it is not easily breakable. Antifragile goes further and states that the stress will make the object better than it was before.

Exercise can clearly be both. If you provide a safe stimulus and allow time for recovery, your muscles will get stronger. If safety or recoverability is compromised, then what could have been Antifragile just becomes fragile.

CrossFit workouts might be random, but the body does not require randomness to gain strength. Get the weight, volume, recovery, form, or tempo wrong in CrossFit and you will be sidelined with injuries that create damage far worse than the benefits received. The losses are not limited. One bad rep of a poorly selected exercise can sideline you for weeks, months, or years.

For exercise to be truly Antifragile it must be safe. It need not be random.

To construct an exercise plan that is Antifragile, one should solve for safety first. The movement should have a very low skill component because the more difficult the exercise the harder it will be to perform safely under load and fatigued situations. CrossFit uses compound movements that have high skill requirements. CrossFit solves for power and strength first and then attempts to make it safer. And they aren’t always successful as a lot of people get injured from either compromised form, using too much weight or too much volume.

I believe you can construct an exercise plan that is safe, effective, and antifragile with High-Intensity Training (HIT). The Big 5 Workout as described in Body By Science has a machine-based plan and Hillfit 2.0 has a bodyweight approach. Both are designed for safety first. The skill needed to perform each movement is extremely low. By slowing down the movement and removing momentum, you not only end up using less weight, but you aren’t powering through weak points in the repetition. The progression path of increasing weight or time under load on an exercise that allows one to go to failure is safe by design as long as it is performed slowly. That makes HIT Antifragile. 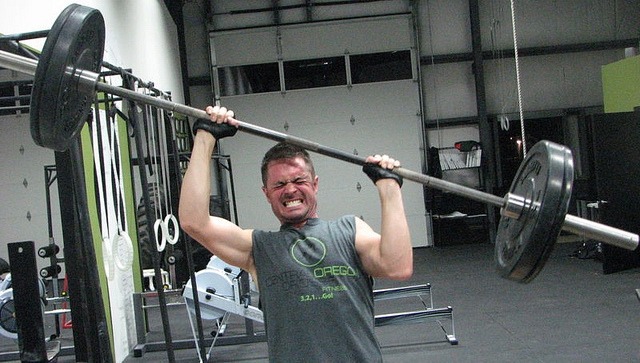 Photo by crossfitpaleodietfitnessclasses. A static hold or slow press with lighter dumbbells would not only be safer, but just as effective for building shoulder strength.

This post is not meant to start a battle with CrossFit. Even Taleb got it wrong. In the post What Taleb Got Wrong in Antifragile, I use the author’s own lessons to discredit his approach to exercise as not being Antifragile.