5 Ideas From Food For Mood

Matt Stone just released a new book titled Food for Mood: Dietary and Lifestyle Interventions for Anxiety, Depression, and Other Mood Disorders. Like his other books, it is an extension of the metabolism discussion. This particular book focuses on the role that our food and beverage choices and timing can have on both reducing or inducing anxiety. 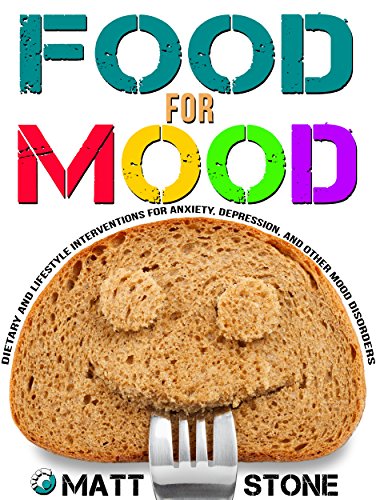 Food for Mood: Dietary and Lifestyle Interventions for Anxiety, Depression, and Other Mood Disorders by Matt Stone

For the most part, I enjoyed the book. Here are some ideas from the book that I found most interesting.

I knew this to be true, but when I read that sentence again, I immediately thought of the person who has struggled with fat loss for years. It is very likely that past diets have put them into a higher stressed state before they “begin again” with another attempt to lose weight. The more years of dieting, the greater the likelihood their metabolism has dropped as a result of lower thyroid and increased cortisol. Starting yet another diet is likely to fail without first addressing that stressed state.

#2 Dieting too hard can result in anxiety and poor sleep.

My #1 tip on the post Better Sleep for the Too Early Riser is Sleep Before Other Goals.

You may wish to gain muscle, lose weight or both. Maybe you have performance goals. Until you are sleeping like a champion, put them aside. Once you are sleeping better, body re-composition goals will become much easier. You do not want to stack stressors.

This was the most interesting part of the book to me. I was aware that slowing the breath reduces anxiety. However, I hadn’t thought much about the depth of breath. The style of breathing discussed in the book is Buteyko. This is something I’ll be looking into more. The slow part makes sense to me. The shallow part doesn’t.

#4 You Can Induce Anxiety by Drinking Too Many Beverages

This is an extension of an idea that was discussed in more depth in his other books Eat For Heat and Diet Recovery 2. Basically drinking a lot of beverages can reduce body temperature. This lowers metabolism and can result in feelings of anxiousness. When I did my “Turn Up the Heat” experiment, I cut back on beverages. The result was I slept better and my body temperature went up by 1 degree. Not that I felt anxious before, but I did experience more calmness. I give part of that credit to drinking less water.

#5 Consume Salty and Starchy Foods During an Anxiety Attack

It doesn’t even have to be an anxiety attack. Anytime you are feeling stressed, salt seems to help. I use it my late-night sleep dust. I’m also very aware of stressors and when they happen simultaneously I go for something like potato chips.

Food For Mood also had sections on mood stability, depression, and why increasing serotonin might decrease metabolism.

Next 7 Ways to Reduce Your Car Repair Costs

Previous Lean Out While You Sleep