Last month, I posted Constrained Total Energy Expenditure and Metabolic Adaptation, which is an overview of the research of Dr. Herman Pontzer. In short, his work makes the case that we adapt metabolically to higher levels of exercise by burning fewer calories than expected. So as one gets more and more active, the calories burned don’t increase linearly. The caloric burn rises at first and then drops often back to a pre-activity level.

Read the notes in Part 1 for more details.

In this post, I sought out more resources to extend the discussion.

The Exercise Paradox is an article Dr. Pontzer wrote for Scientific American. It is behind a paywall, but I found a PDF copy online (May 2019: link removed).

We found that daily physical activity, tracked by the accelerometers, was only weakly related to metabolism. On average, couch potatoes tended to spend about 200 fewer calories each day than people who were moderately active: the kind of folks who get some exercise during the week and make a point to take the stairs. But more important, energy expenditure plateaued at higher activity levels: people with the most intensely active daily lives burned the same number of calories each day as those with moderately active lives.

When it comes to calories, fat loss, and exercise, one of my go-to researchers is Lyle McDonald. I found his thoughts on Pontzer’s work on a year-old comment on Facebook. 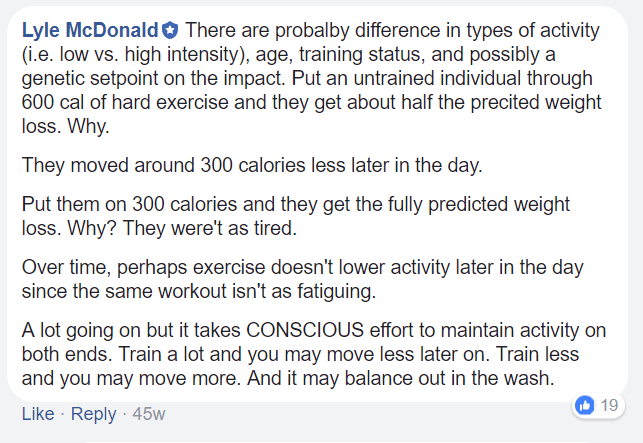 McDonald’s comment rang true for me personally. At the times of my life when I trained the hardest, were also the times you couldn’t peel me off the coach at the end of the day. And the times when I trained the least, were the times I couldn’t sit still. In my case, it seemed like my body was trying to even things out as best as it could.

McDonald also linked to Physical Activity and the Missing Calories on PubMed. Text here. That article was balanced. Here is the critique. 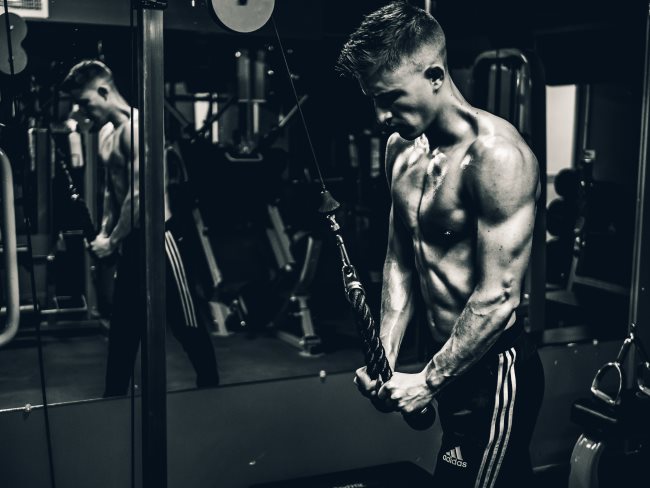 G-Flux is a concept I learned about from Precision Nutrition. They explain it as a process where when high levels of activity are matched with high levels of calories you get a better body composition and health outcome than would be predicted from a linear calorie model.

Read the article All About G-Flux by Ryan Andrews for an excellent overview. The article states:

…to get and stay lean, it’s probably better to exercise as much as you can while eating as much as possible — as long as you’re gaining muscle and losing fat — than the reverse.

The example in the article compares 3 cases where an individual is in calorie balance at 2000, 2500, and 3000 calories. The best outcome is the highest activity level that uses 3000 calories.

My impression is G-Flux doesn’t conflict with Dr. Pontzer’s work, because calories are increased. Without creating a calorie deficit, the body doesn’t need to compensate and down-regulate metabolism. To the fans of high levels of exercise, this seems like the path to take. Keep eating to support a higher metabolism and a high activity level.

Even if you don’t exercise a lot, I’m guessing this principle still applies, although it appears to work best at the upper-end. The question is how do you know when your weight-table body is increasing or decreasing metabolism on a week to week basis? There are so many variables to consider.

My prediction is that technology will solve this problem in time. If I can have a gadget that measures everything and tells me to eat more or move more in near-realtime, that’d be awesome. Until that day comes, perhaps we use a combination of body fat percentage (or tape measure) and (maybe) body temperature or resting pulse? If body-temp and resting pulse are falling that might be signs to eat more. This is speculation.

To me, it sounds like there is an initial agreement that high levels of exercise will not have the previously predicted body composition effects. What those levels of exercise are for you at different stages of life will likely vary.

The G-Flux angle is interesting, but I know my slower recovery times did not allow for me to exercise a lot or for long periods. Or perhaps, all these years I’ve never consumed enough calories to support the higher levels of activity to see where it would have taken me? There is a lot to think about here.

Next My Bizarre Injury – 4 Months Later

Previous Potato Hacking For the Reluctant