Urban Hiking – Then and Now

I began urban hiking in 2008. For a brief overview, read the introduction on my Best of Urban Hiking page.

The way I urban hike has changed quite a bit since the early days. Because I now have a detailed familiarity with almost all the neighborhoods in Seattle, the spirit of novelty is mostly gone. If you combine that with the fact, I’ve been battling knee issues for 5 years, the number of urban hikes I now do are fewer and the mileage is less.

Although my knee is much better now, I don’t see the need to push things with a 12 or 22-mile hike through the city. The sweet spot in good weather for me is around 6 to 10 miles and that might be broken up into two or three parts.

During the last 11 years, not only did I change, but so did my city and I’m guessing your city as well.

One of the reasons that urban hiking clicked with me was that instead of being isolated on some remote trail an hour or more from the city, you were in the city with your neighbors. You had small talk. You acknowledged each other. You made eye contact.

I posted about how charming I found my new home of Seattle back in April 2008 after living seven years in San Diego. From the post Eight months in Seattle:

Seattle is my favorite city. It has the charm of a much smaller city with the amenities of a larger city. The people are the nicest of any city I’ve been to. They have a phrase called the Seattle Freeze. It states that people in Seattle are only friendly on the surface and that friendliness doesn’t mean they want to be friends. As someone who has lived in the Midwest, Mid-Atlantic, South Florida, and Southern California, I never understood this label. If all the friendliness I’ve experienced is fake friendliness, I’ll take it over the no friendliness of other cities.

I also touched on the cafe culture.

The cafe culture is probably the reason there are so many web start-ups in the area. Avoid the rain, duck into a coffee house, get wired on espresso and then come up with a business plan while talking to a perfect stranger.

These days are gone. The smartphone killed them. We don’t talk to each other anymore. We don’t even acknowledge each other. Step into any coffee shop in Seattle and 95% of the people there are face down into a laptop or phone with headphones isolated from the other patrons.

The only people that acknowledge me when I am walking through the city are people trying to shake me down for money. The growing army of mentally deranged street people and the clipboard jockeys raising money for charities. I don’t know which I find more distasteful.

Urban hiking feels more isolating than trail hiking did a decade ago. On most days, I’d rather be back on the trails if they weren’t so far away. 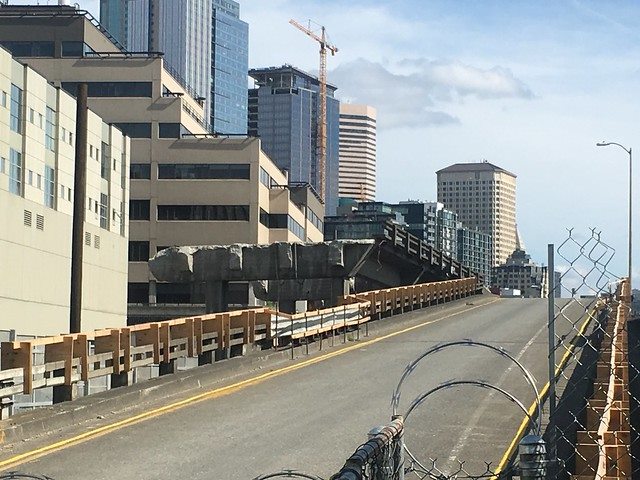 Seattle is in the process of tearing down the Viaduct, which was a freeway that ran along the waterfront.

I’m Part of the Problem Too

When social media and mobile apps became more enticing my neighbors became less open and friendly. My response wasn’t to make social media part of my urban hiking life, but instead, I discovered podcasts. Rather than choosing to walk through areas of the city with more people, I put on my headphones and began selecting routes to avoid them.

Choosing podcasts over openness wasn’t a conscious decision, but my actions said that I had given up on my neighbors in a way that I had felt they gave up on me and each other.

My urban hikes went from me connecting to my city and fellow citizens, to me being a student of The 10,000 Steps University. If I can’t go back to 2008, I can at least learn a lot of information while I’m getting my steps in.

Truth be told, maybe the tradeoff was fair. I traded the possibilities of a few new friendships over a few thousand hours of knowledge on economics, health, technology, and Spanish. Which is better? Beats me. At least I’m not walking down the street blasting mumble rap in my ears while glued to social media.

As long as I live in the city, I will continue to urban hike. For most of these hikes, I will choose more isolated routes and I’ll be listening to podcasts. I’d love to say that I’ll try and unplug more, but most days I probably won’t. Today was a lovely day here in Seattle. I could have done my downtown urban hike in silence, but I chose to knock out a Spanish lesson and listen to a 2-hour interview with Wim Hof instead. It’s a new era.

How about your city? Have things changed much with how people interact with each other on the streets and cafes in the last decade?

Next Tackling Twitter – How I Cut My Daily Usage