Anatomy of a Bad Trade

Occasionally I serve up a post on my investing successes. Now let me tell you about the worst trade I ever made and the lessons I learned.

On January 3, 2008, on the post My Drudge Report Oil Short Investment Tip, I wrote:

Ive noticed over the past few years that whenever a barrel of oil hits a new price threshold that the DrudgeReport will put out a big red banner or siren announcing it. And then something happens almost without fail in the following two weeks. The price drops.

After seeing this pattern play out over and over, I decided to make some money on it. The last three times I saw the oil headline on Drudge, I bought shares of DCR. DCR MACROSHARES OIL DOWN is an ETF that makes money as oil falls in price. I set a goal of 5-10% gains with a 2 week holding limit. As soon at it hits, I sell the shares. I try to avoid buying on a Friday as bad things that can spike oil often happen over the weekend.

Last December as oil was going higher and higher, I went on record saying the price would collapse by the end of the year. Deflation smacks commodities the hardest. What I never saw coming was the spike toward $150 a barrel. And the people at Macroshares never saw it either. Their leveraged ETF was not designed to handle spikes that high and the ETF stopped trading as the price approached $0.00. 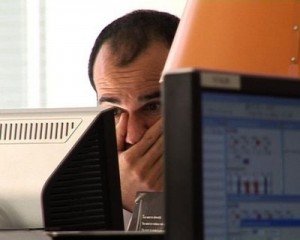 What did I do wrong?

So I ended up selling for a $9,000 loss. Had I held until the ETF closed shop, I would have lost $16,000. Now that oil is falling like rock, it is a little ironic knowing that had MACROSHARES not bungled the ETF and had I slipped into a coma and woke up today, my investment would be up over $50 grand.

What are the lessons I learned?

The biggest lesson I’ve learned from investing, which I must give credit to Nassim Nicholas Taleb, is awareness that it is human nature to credit our successes to our skills and our failures to luck. I lost $9,000 not because hedge funds started speculating in oil, Middle East tension or even that Macroshares was incompetent (which they were). I lost $9,000 because I was wrong.

Next The Scientific Fitness Program