My Review of The Paleo Solution

The Paleo Solution: The Original Human Diet by Robb Wolf starts off with a stellar detailed look at macronutrients, hormones, and then he goes after grains. The Paleo Solution makes the best case I have ever read for removing grains from your diet.

Then the book went into the exercise portion. During his weekly podcast, the topic of CrossFit always comes up. CrossFit is a high-intensity strength / sprinting / gymnastics form of training. To me, CrossFit appears to be overtraining. However, I have an open mind and I know Robb is a smart guy. I primarily bought this book hoping he would detail his thoughts on this extreme form of exercise. He doesn’t. The exercise portion appears to have been written for people with minimal exercise knowledge. This is fine, but my guess is most of Robb’s podcast fans are well past this point. Robb does state he will be writing a second book on advanced fitness called Fight Prep. 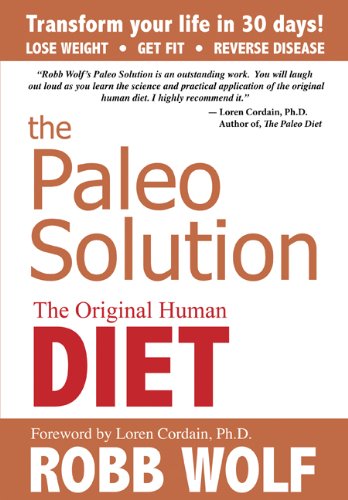 The Paleo Solution keeps the food chapter simple stressing the fact that the paleo diet really is simple. This is good since it helps empower people. Most people eat paleo meals already. Bacon and eggs are paleo (hold the toast). So is a grilled chicken salad (no croutons). The one part that left me puzzled was when he said “find leaner cuts of conventional meats”. Why leaner? He spent numerous pages detailing how it is carbohydrates that cause fat gain and not fat. Why am I am to choose leaner cuts? That is never explained. If I’m already eating 100% grass-fed meat with optimal omega ratios, why should I avoid any cut of meat? Everything I’ve read on this topic so far has claimed that Paleolithic man favored fattier cuts of meat. *** UPDATE: Gil clarified this statement in the comments below.

Another issue I have with this book is that there is no index in the back. Can you imagine if Good Calories, Bad Calories was published without an index? Many years ago when Dan Duchaine published Body Opus without an index, a dedicated reader stepped up and created one. That home-grown index was widely distributed across the web. I hope that a fan of The Paleo Solution does the same thing.

I agree with the paleo message. I have for over two years now. It works. And although I agree with the message of The Paleo Solution, I couldn’t figure out who the book was written for. It seems the first half was written for his current fan base. Those people like me that made this book a NY Times bestseller. The second half is much more accessible to the person just being introduced to the paleo diet. I just hope those people make it to the second half of the book without being overwhelmed.

I loved the first half of The Paleo Solution. For me, the second half was a disappointment. Would I recommend this book to a friend or loved one that needed nutritional help? Probably not. I’d have them read Primal Blueprint or Primal Body Primal Mind first. And then if they still wanted to eat grains, I’d hand them The Paleo Solution.

Next Back From Portland, Oregon

Previous If I Were The King of Costco