John Little is one of my favorite writers in the fitness field. He co-wrote the definitive fitness book Body by Science. Recently, I listen to an outstanding interview with him on High Intensity Nation. In the interview he discussed a style of training called Max Contraction Training that sounded interesting, so I checked to see if the book was in my library. It wasn’t, but a book with a similar title co-written by John Little in 1999 was there. 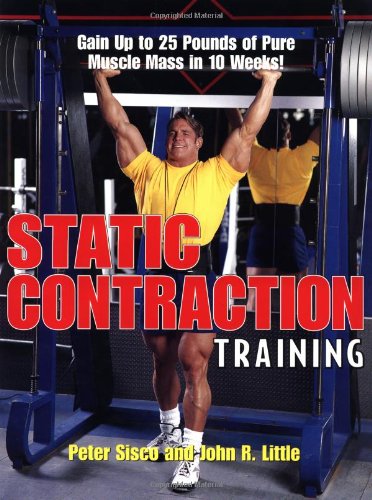 Static Contraction Training by Peter Sisco and John Little is a very quick read. This is a style of high intensity training that uses 1 set to failure for a handful of exercises. Instead of moving the weight slowly like is done in Body by Science and other slow training methods, this uses – as the title alludes to – a static hold of a heavy weight.

The premise is that when you raise and lower a weight, no matter how slow you go, tension is reduced at different points in the movement. An example mentioned in the book is that if you are lifting 200 pounds that no matter how slow the descent, you must lower the tension below 200 or the negative portion of the repetition can not occur. With SCT you take a weight that is so heavy that you can only hold it for 5 to 15 seconds. As soon as you can hold it longer than 15 seconds, it is time to increase the weight.

Safety was my primary concern when I read about this training method. You should be using either a trusted training partner to spot weights, machines or a squat rack with pins in the right position. The weight you can hold will be significantly greater than one you can lift. I think the book could have done a better job in explaining how to do these exercises safely. I’ve been lifting since 1994 and I still have questions on 30% of the exercises mentioned. My guess is this topic is expanded upon in the updated Max Contraction Training.

I did have one problem with this book. The photos. This book has lots of photos of professional body builders who used steroids and built their body using techniques other than SCT. If I were editing this book, I would have taken out all those photos which make up for over half the book and instead put photos or drawings on how to perform each exercise in a safe manner. The book has several photos of Craig Titus, who was later convicted of murder, arson, and kidnapping. Not exactly an ideal role model for a training protocol.

What do I think of SCT? The reviews on Amazon are love and hate. I haven’t tried it, but I will. John Little is a smart guy and I respect a lot of the people who respect him. One of the points that John drives home in his podcast interview is something I know to be true. Most people in the gym are over training. They aren’t allowing their body sufficient time to fully recover. Maybe some of the critics to this program are those gym rats that lower intensity in order to squeeze in additional volume? Or maybe it works better for some than others? I’ll let you know how it goes.

Next 30 Days Without Sugar or Fruit

Previous The No Potato Shepard’s Pie