Why We Get Fat 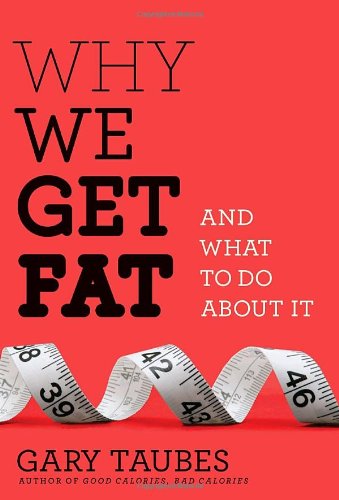 Why We Get Fat: And What to Do About It (Borzoi Books) by Gary Taubes was written to be more accessible than his book Good Calories, Bad Calories. Although many of us adored the GCBC book (I read it twice), the majority of people don’t have the time or energy to read a 600+ page exhaustive expose on nutrition and nutritional history. But the message is important, important enough that a scaled-back version with half as many pages was released.

What is the message? It’s the carbs, not the calories. Carbohydrates drive insulin which drives fat storage. The carbs we’ve been told to eat to be healthy are the ones making us fat and ill. Why We Get Fat also exposes the mistruths about our understanding of cholesterol and heart disease. The book also touches on cancer, diabetes, and Alzheimer’s disease.

Last year when I saw Gary Taubes give a free lecture at one of the University of Washington medical buildings, he shared his frustration about getting his message out to the medical community. He could have easily sold out Seattle’s Townhall at $5 a ticket, but he wanted to reach doctors, so he brought his lecture to them. Very few people showed up for the lecture. Most were fellow nutritional geeks like myself.

Is this book exhaustive in explaining every pound of excessive fat? No, but I don’t think anyone book could do that. Taubes focuses on insulin. He doesn’t go into omega ratios or gut flora or other inflammatory factors that may contribute to obesity. Some will criticize this, but Taubes is not a doctor or nutritionist. He is a science reporter focusing on the role of insulin.

Why We Get Fat is an outstanding book that I think will be more accessible to the public. There are still a few dry chapters on history, but to understand how we arrived at such bad conventional nutritional wisdom some back story is needed.

UPDATE: I no longer think Taubes is right regarding his insulin theory of obesity.

Next Ending the 30 Day No Sugar No Fruit Experiment

Previous My Nutritional Plan of Attack Against Incoming Radiation