The Paleo/HIT Cyclical Approach to Fitness and Nutrition

My dietary tweaking over the past three years has led me to discover what many others in the elite fitness community have already discovered. That is the superiority of a cyclical approach to fitness and nutrition. Eating the same number of meals and calories a day in and day out at the same time is too command and control. Nature isn’t like that. Paleo man knew all about cyclical nutrition and fitness.

Paleo man is hungry and the area he is at has no food. So he travels to a new area. No Cliff Bar or smoothie. He is motivated by hunger and the reality that if he doesn’t acquire food, he will die. It is OK that he doesn’t have a fanny pack full of snacks. He has something better: body fat. In the absence of glucose, his insulin levels drop and his body becomes efficient at accessing stored fat. To preserve muscle, his growth hormone levels increase. 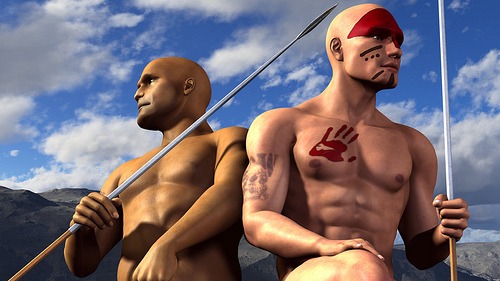 Paleo man comes across an animal and engages in the hunt. He uses high bursts of energy and strength to capture his meal. Note that he didn’t jog up to the animal using some nonsensical target heart rate and he didn’t stand one-legged on a Bosu Ball during the hunt. Paleo man, like any other mammal keen on survival, starts eating the animal’s organ meat first, because that is where the most nutrients are. Then he goes for the fatty cuts of meat. Lean meat might be left for the buzzards.

Now Paleo man is full. Time to rest and relax. No spin class is needed for him to keep his cardio edge. That is energy foolish and could bring him closer to starvation. It wouldn’t be until the late 1960s that man would get duped into believing that we need cardio for a healthy heart. And then it would be a few decades more before science would show that cardiovascular training is a myth.

Back to the present. A few months ago, I began a TKD (targeted ketogenic diet). On the day before I went to the gym to lift weights, I would engage in Intermittent Fasting and low-carb dieting. I put myself into a ketogenic state. The next day, I would enter the gym in a fasted state* and “engage in battle”. Unlike Paleo man, when I demonstrate strength I can control for safety and work specifically with machines based upon human biomechanics. For 10-15 minutes, I do an all-out High Intensity Training workout. One set to failure for about 5-7 exercises.

* These days I supplement with BCAA. For an explanation, read Early Morning Fasted Training on Leangains.

Then I eat. I eat a lot. Protein, carbs and fat. I am pulling myself out of ketosis and fueling the anabolic process. Then I rest. I won’t return to the gym for another 5-7 days. Sure I will go for walks or 2-3 very short sprints, but anything more would be energy foolish and send the wrong hormonal signals to my body. Doing cardio is ridiculous as it is highly inflammatory, suppresses your immune system, catabolizes muscle and reduces your insulin sensitivity.

Between workouts, I vary my food intake. Some days I eat more and some less. Some days are low carb and some are moderate. I may skip breakfast or not. Like Paleo man, my food intake is not predictable. There is never a point in the week, where I have to eat. My body has become hyper-efficient at regulating my energy levels. No sugar crashes or naps needed.

I started this cyclical approach a few months ago. It is freakishly effective. My metabolism is rocking fast. I exercise far less than I used to and I eat more. By removing the big 4 toxins (sugar, wheat, soy and vegetable oils) and adjusting my nutrient intake and timing, I am in the best shape of my life.

UPDATE September 2012: I no longer feel BCAA is needed for fasted training. See Thinking About Supplements – 2012 Edition for an explanation.

UPDATE December 2012: I no longer consider sugar to a big toxin. I’ve become a big fan of ice cream.