One of the jobs I had in college was loading trucks for UPS. It was the most exhausting job I’ve ever had. It made Army Basic Training seem like working at a library. One night I came home so worn out that I couldn’t even turn to my side to go to sleep. After an entire childhood as a side sleeper, I became a back sleeper. And until recently I remained a back sleeper. 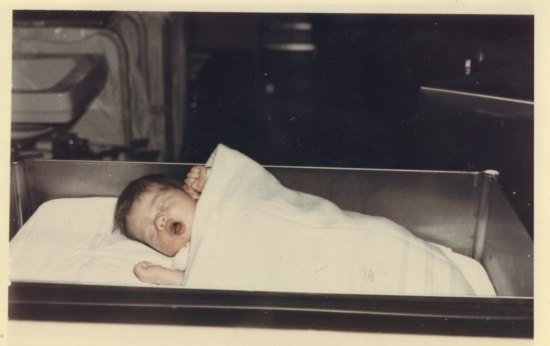 Me as side sleeper (2 days old)

On the night of January 23rd I woke up with a severe headache and discovered I was having trouble breathing. I was alarmed enough to spend a few hours researching sleep apnea. I had always assumed that because I am lean and do not snore that sleep apnea wasn’t possible. Turns out that was a false assumption. One of the things I learned was that you can increase oxygen flow by sleeping on your side. From the Wikipedia page on sleep apnea:

For mild cases of sleep apnea, physicians often recommend sleeping on one’s side, which can prevent the tongue and palate from falling backwards in the throat and blocking the airway.

I wasn’t even sure I had even a minor case of sleep apnea, but this was worth trying. I had assumed it was going to be a hard habit to switch from being a back sleeper to a side sleeper. Well, it took just 3 nights to break the habit. I must be getting good at this self experimentation stuff. I never thought I could break such an ingrained habit in less than a week. Anyway, some interesting data appears to be surfacing. I hesitate to get excited about this though, because I’ve been burned by initial trends too many times already.

Starting last August 21st, I began tracking sleep quality independently from headaches. Although they are correlated, that correlation is not 100%. Sleep quality can be improved by improving a response to a headache of a given severity. A poor response results in poor sleep quality. A good response results in an improved Sleep Quality score even at the same severity. Side sleep – so far – seems to be having a positive impact on Sleep Quality. To the data!

Looking at the data, it appears that there was some improvement when I went from being a back sleeper to a side sleeper. I hesitate to get excited, because I may just not have enough data to draw a true conclusion. My hunch tells me that sleeping on my side is increasing my sleep quality by delaying the headache until later in the night. And maybe by delaying the headache, it surfaces with a lower intensity.

Trading One Problem For Another?

Since I started side sleep, I have noticed many mornings that I wake up with pressure in my right ear. Almost like the first few times I flew in an airplane. It isn’t painful, but it is annoying. I’ll happily take a few hours of ear pressure over a sinus headache any day, as I don’t feel it until after I wake up. This might even be a clue to the root causes of the headache?

I’ll continue sleeping on my side and collecting more data. The hunt continues.