My Response to the Exercise and Overeating Study

How is that for odd timing? A day after I completed my 5 part series on the role of exercise and fat loss, a widely reported study on the same topic surfaces. The short summary is that not everyone loses weight exercising and some people actually overeat to compensate for increased energy demands. Sound familiar? Whole Health Source did a summary of the study titled Exercise and Food Intake which discussed the individual variability.

The study ties in food reward to exercise, which is a topic I was thinking about when I wrote my series. I look forward to seeing what researchers learn in further studies, however I did have some issues with the study as it applied to fat loss. 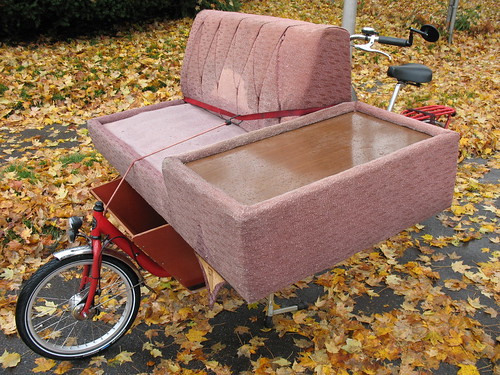 Photo by Mark Stosberg. Can I ride up front? 🙂

As much as I agree with the headline of the study, once I got into the details, I found it useless. We all aren’t 22 years old. Long duration aerobic exercise is highly stressful to our bodies and hormones. And most importantly, 12 weeks is no where near enough time to make a conclusion on the role exercise has on fat loss. Bodybuilders know how to exercise to get super lean in weeks, but those gains are unsustainable for long periods of time.

I believe the key to leveraging exercising for fat loss is to do highly intense brief exercises, followed by rest periods that allow the body to recover fully and ideally quickly.