I’m often asked if I juice. Not steroids, but with fruits and vegetables. The answer is I don’t. I remain unconvinced that juicing offers the health benefits its fans claim. Before I get attacked in the comments, I’ll explain why I am a juicing skeptic. I could be wrong.

Whenever I run into a fan of juicing, the story is almost the same.

My opinion is the most dramatic health benefits come from removing the crap, not from the juicing. My crap foods were gluten, vegetable oils, and unfermented soy. Even though I added more nutrient-dense foods, it was removing the toxins that allowed my body to heal.

Another reason I am a juicing skeptic is that it doesn’t seem natural to buy a massive amount of fruits and vegetables, pulverize them into a shake, and then throw out all the vegetable fiber. The juice consumer then slams their body with a concentration of vitamins never found in nature at that level. The expectation is the body will be able to absorb and thrive by overloading nutrients. I understand the argument that in order to get that much nutrition, juicing solves a problem that cooking doesn’t. When you cook the vegetables, you can eat more in one sitting, but you end up losing some of the nutrients.

There are two other solutions that have been available to mankind for many thousands of years. Neither requires buying massive quantities of fresh vegetables or purchasing a kick-ass juicer. When it comes to nutrient density in a real food form that our ancestors thrived on, but modern man mostly ignores, we have offal and fermentation.

Back in the old days, we didn’t have planes flying fresh asparagus from Peru to our air-conditioned grocery store. We also didn’t have the technology to them turn those fresh vegetables into a liquid for our morning smoothie. We didn’t even have refrigeration. How did we survive and get the nutrients provided by vegetables, especially outside harvest time? One method was eating animals, particularly their organ meat. FreeTheAnimal did a post showing that 1/4 pound of beef liver has as much nutrition as 5 pounds of fruit. You see Mother Nature has a plan for us that doesn’t involve 7 easy payments. But wait there’s more!

Mankind also figured out that fermentation not only preserved vegetables beyond harvest, but they became softer to eat and they had higher nutrient levels than fresh vegetables. Yes, fermented vegetables can have 2 to 3 times the vitamin levels of fresh vegetables. I can also eat a bowl of sauerkraut or kimchi a lot easier than raw cabbage. Plus they have healthy probiotics that you do not get from juicing. 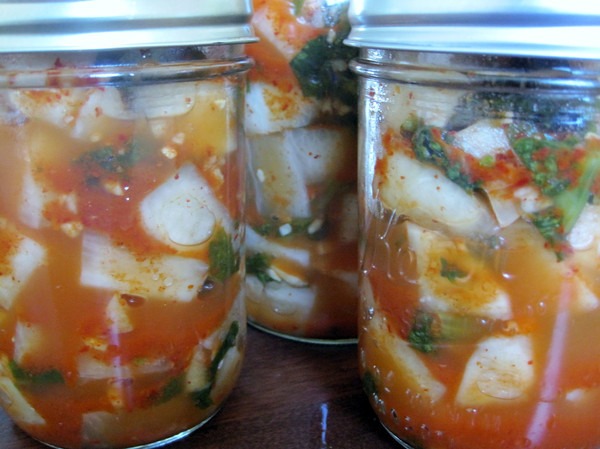 I also want to briefly touch on a topic that I’ll explore more in a future post. It is about nutritional arrogance. Regardless of if you’re Paleo, vegetarian, or even a Dr. Oz follower, we discuss the nutritional properties of food as if it is settled science. It might be settled science, but I don’t believe so. In the entire history of the world, it has only been 99 years since we discovered Vitamin A. Folic Acid wasn’t discovered until 1941. Our understanding of Omega 3 ratios was primitive until the 1990s. Hell, in the last few years we’ve seen major breaks in our understanding of dietary inflammation, gluten, and gut flora. There are over 3,000 derivatives of Vitamin D3 and we’ve only have published biochemical data on 1,000 of them.

This tells me that there is a good chance that there is A LOT MORE we have yet to learn about food. We may still be in the Stone Age when it comes to nutrition. When I eat beef liver or sauerkraut, I’m eating in harmony with the way my ancestors did. With juicing, I don’t know how my body will respond to the nutrient overloading or what good things are being thrown away. Traditional eating doesn’t require nutritional science for validation. Our existence is proof it works.

Would I ever juice? If I were sick, had removed all the toxins from diet, was consuming offal and fermented foods, and was still nutrient deficient then I might. I’d likely work with a nutritionist and get blood work done also. Most people do not fall into this camp. They want the damage from their cupcakes to be washed away by slugging a glass of blended produce. And liver is too yucky for them.