Hacking Hormones in a Relationship

Over three years I watched the DVD lectures by evolutionary fitness guru Art De Vany. In those seven hours I learned a lot about hormones and how they applied to human performance. Using what I learned, I made several changes in my life which ended up yielding a positive health outcome. Because I was in tune with how my hormones were being triggered, those changes did not require massive amounts of willpower. Timing nutrition and training in a way that promoted optimal hormone expression made the body composition benefits I experienced seem almost effortless.

A few days ago I saw a reference to a relationship video titled Venus on Fire, Mars on Ice by John Gray. My gut reaction was negative because my opinion of the relationship advice industry is highly cynical. The industry caters to women who are unhappy and looking for validation that someone else is to blame for that unhappiness. This is the type of message that generates positive reviews and word-of-mouth buzz that sells books and seminars. Perhaps I am hopelessly naive on this point, but I do have an economics background and we all know in business that the customer is always right. Start telling the customer that they might be wrong and they will take their business elsewhere.

For whatever reason, I decided to watch the video. I ended up watching the 1 hour 37 minute video twice. I’m so glad I did. Now I know why I have been such a poor predictor of relationship outcomes. Ones that I assumed were solid ended up being doomed and ones that appeared rocky were actually solid. Just like De Vany taught me with nutrition, there is also a timing component associated with the hormones in male-female relationships.

In the speech, you will learn how men and women are wired differently and how as a society we have failed to understand this. This isn’t psychology. It’s biology. 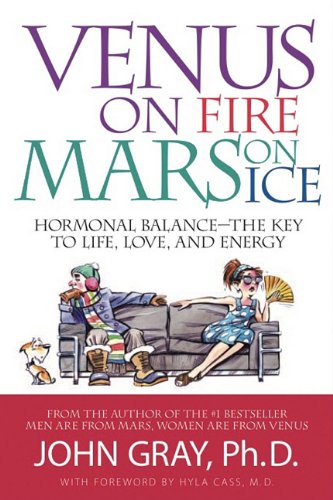 Venus on Fire, Mars on Ice: Hormonal Balance – The Key to Life, Love and Energy by John Gray Ph.D.

Not everyone will find time to watch the video or read his book. Here are some of the ideas covered. The video covers much more.

The takeaway lesson is that men are becoming more feminine and women are becoming more masculine and this isn’t good for our health and our relationships. I have some more thoughts on this topic, but this post is getting long. I’ll pick this up in a future post. It is a fascinating topic.

Next Hacking Testosterone and Increasing Oxytocin