The woman is now taking on more roles that produce testosterone, which increases her stress levels. Under normal situations, a male with a higher testosterone level could trigger oxytocin in the woman lowering her stress, but the estrogen-dominant male will either engage in “tit for tat” arguing or become further submissive. Neither will help lower the stress on the woman or himself. Stress levels build on both sides and this leads to compromised immune systems and poor health.

Dr. Gray’s lecture was targeted mostly towards couples and how they should interact with each other to produce optimal hormonal responses. But what about us single people? Before we fall into the role reversal trap which breaks up many relationships, we should get our own ducks in order.

Mark Sisson posted A Primal Primer: Testosterone with several ideas on how to increase testosterone naturally. They include:

A few ideas that I would also include are:

Dr. Gray lists these attributes as oxytocin simulators: sharing, teamwork, communication, shared responsibilities, affection, support, collaboration, and compliments. He further states that social networks like Facebook are highly addictive to females because they provide the illusion of community they need, but they do not produce oxytocin. They need real face-to-face interactions to trigger that positive hormone, which is a problem because modern life has become very isolating for women. Much of their social interaction is no longer associated with unconditional giving, but with deadlines and the need to hurry up, which is a primary oxytocin inhibitor. Unlike the recommendations for men, it seems each woman will have to solve this in her own way, depending upon her career, location, and responsibilities.

Volunteer work might help. Bonding with a pet can also produce oxytocin. I’ve always wondered why women choose to go to yoga class together instead of buying a DVD and doing the exercises at home. Now I understand why. They are sharing and communicating with other women, which is reducing their stress levels. 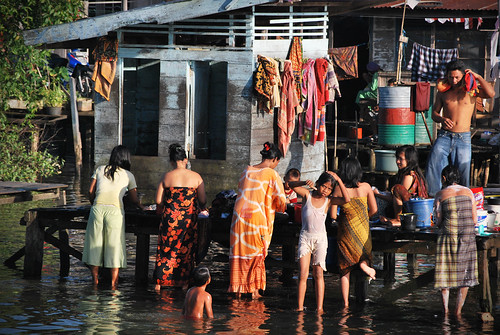 Photo by Jason D’ Great. Dr. Gray talked about the community aspect that women had when they washed clothes by hand with other women. Although this work was tough, it did trigger hormones that reduced the woman’s stress level.

This post just touched the surface of this topic. Note that I am less than a week into my understanding of this subject. I have some more thoughts, which I plan to research. In the meantime, is there anything else you’d like to add to this post?

Next High Satiety Foods – The Results

Previous Hacking Hormones in a Relationship