When I first starting making kimchi I thought I would never make a soup or stew using that prized ingredient. The reasons were it takes a decent amount of effort to make kimchi and that the heat from the soup would kill off all the probiotic benefits. So in other words, why bother going through the fermentation process?

A few weeks ago I made a ridiculous amount of kimchi. One of the variations had a little too much red pepper in it and I probably fermented a day too long. It had a texture that was softer than I prefer. Because I had so much kimchi and I was eager to try new fermentation ideas out, I had a need to use it up quickly. That is when I decided to use it for a stew.

The basics of Korean Stew can be found at the wonderful site Beyond Kimchee. I decided not to use their recipe and just wing it with something far more simple. Someday I’ll do their recipe minus the tofu. All I did was add kimchi to a skillet mixed with cubed pork shoulder. Then I added some water and let it cook for 20-30 minutes. Done. I served it over rice. I also did this recipe with cubed lamb. It works just as well.

Cooking with fermented food did bring out a nice flavor that one wouldn’t get using fresh ingredients. The recipe on Beyond Kimchee and other sites recommend using over ripe kimchi. Apparently it adds more flavor, which makes sense to me now. One trick to over ripe a ferment is to place it out on the counter for several hours or longer before starting the stew. 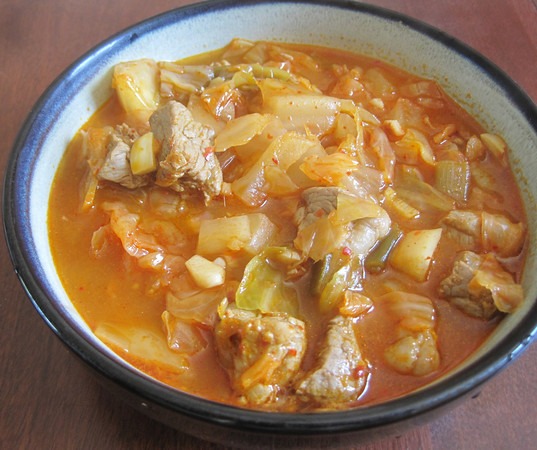 If you ever end up with either too kimchi or a kimchi that doesn’t taste great on its own, throw it a pan and start building a soup.

Next Hacking Hormones in a Relationship

Previous Why Ice Cream is Better Than Protein Powder