Step Out of the Paleo Echo Chamber

This weekend when I learned that 12 Paleo Myths by Matt Stone was available for free on Amazon Kindle until Feb 20th, I reached out to several of my Paleo friends. Although each message was different. The general point was I found this to be a well written caring critique of some of the Paleo beliefs. Not every point will apply to every person, but it can’t hurt to be aware of them. At a price point of FREE, why not grab it and give it a skim?

The response so far has been disappointing. Not a thank you. Not a piss off. Nothing. Actually, one person hinted that I should leave the local Paleo group. And these are people I know and care about.

I like Paleo. I like the narrative as a way for people without science backgrounds to embrace a less neolithic diet. What I don’t like is the narrow definition Paleo preached by a handful of influential bloggers as gospel. You know the low-carb, almond flour, CrossFit, sugar-is-evil posse.

Many Paleo adopters seem to have forgotten that at one time they were open-minded enough to rethink their diet. They stopped fearing saturated fat, dietary cholesterol, and salt. But the lesson that we might not know everything and we might get some things wrong seems to be lost. 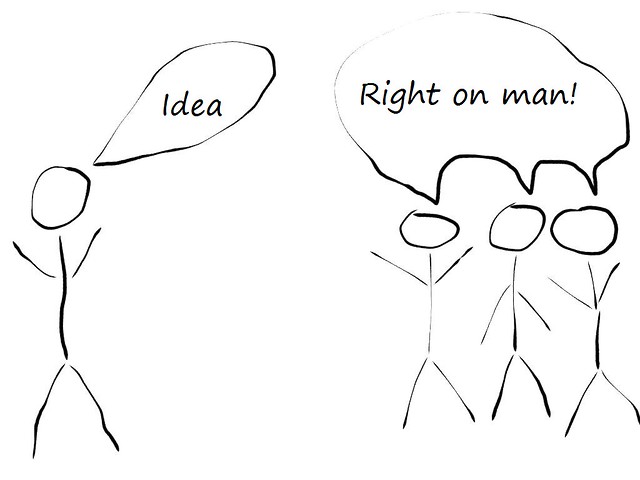 right on man! by Bobbi Newman

Some of the attacks on Paleo have been downright silly, but that doesn’t mean all criticisms are invalid. Wouldn’t it be wise to be aware of those potential downsides, especially if you are preaching this knowledge to others? But Paleo has grown increasingly cultish.

This was never more clear than after Sally Fallon’s critical review of The Paleo Solution by Robb Wolf. Many Paleo bloggers and commenters went nuts and felt the need to preach “but we’re on the same team”. Paleo and WAPF have a lot in common, but I fully agree with Carbsane. The article had valid criticism. The fact that Robb has been supportive of WAPF is not relevant to the book review. The fact the book was a few years old only becomes irrelevant if and when a new edition is published.

The way to make Paleo better is not to ignore or dismiss critics, but to listen and learn from them. You know evolve. For over a year now I have used the term “Post Paleo” on my Twitter profile. As much as the Paleo cheerleaders annoy me, the haters annoy me even more. They fail to see the enormous benefit a Paleo narrative – flaws and all – has on the health of many people. So “Post Paleo” is a way of saying I respect Paleo as a starting point or foundation, but I’ve moved on.

By the way, if you don’t own a Kindle, each operating system has a Kindle application you can download for free. I have the Kindle app installed on my Windows 7, iPod, and Chromebook.

Next How I Regained the Weight I Lost