How I Regained the Weight I Lost

For almost a decade I was weight stable at 210 pounds. My height is 6 feet 2.5 inches (189 cm). Not overweight, but not lean. Like other ectomorphs, I’ve always valued muscle over leanness. When I moved to Seattle and started playing with lower carbs, intermittent fasting and cold exposure, my weight dropped gradually to 190-195. I wasn’t even trying to lose weight. It just happened. In fact, when the first 10 pounds came off, I was alarmed.

Then for a couple of years, I was weight stable at 190-195. I looked good. I felt great. Unlike most dieters that regain the weight, I felt I could declare victory. I had it all figured out. Without counting calories or even exercising more, I was in the best shape of my life. Then in 2011, I confessed to my grand experiment. I was trying to get lower ab definition without breaking a sweat. By June of 2011, I was ripped and I did it with minimal exercise. True to my goal, I never broke a sweat.

I always kidded that if I ever got ripped, I’d take a glamour photo and then pig out on ice cream.

I never took the photo, because of my reaction to a news event that happened that month. June 2011 is when the Anthony Weiner scandal hit. For those that forgot, Anthony was a US Congressman that posted shirtless photos to social media. He ended up resigning. The “bro shot” selfie of being ripped instantly went from cool to undignified and narcissistic. I gave up any goals related to ab definition and just continued to eat nutrient dense healthy food.

What happened next was completely unexpected. I kept losing weight. I wasn’t weighing myself very often, but I was slowly losing more weight. I was no longer weight stable at 190-195. I was below 190. By the time I got down to 185, I was getting alarmed. Then someone took a photo of me and my face looked gaunt. By early 2012, I was down to 183. My body was cold. My clean eating had become too clean. 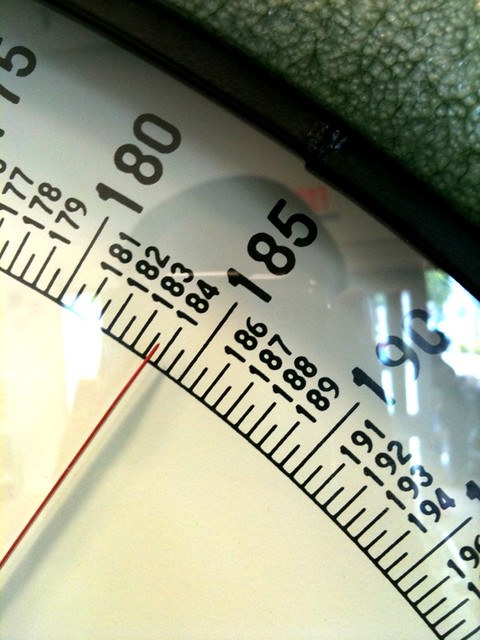 photo by Bob B. Brown

I decided I needed to eat a little dirty to add some weight. So after a bunch of research, I decided to add ice cream to my diet. It worked. I stopped losing weight. Then I started to gain weight. Everything was going fine, but I decided it would be a wonderful health experimenter to see see just how far I could push my ice cream consumption. I gradually increased the ice cream from a pint a week to eventually a pint a day.

I discovered that with clean eating that I could eat 2 or 3 pints of ice cream a week for stable weight. But then I started the hardest experiment ever in October 2012. I went the entire month without coffee. During this very dark period, my sugar consumption spiked. I suddenly had developed a sweet tooth where before I never had one. I was also drinking Mexican colas. And my weight continued to increase.

In December 2012, I started making dairy kefir. My plan was to scale back on the ice cream and replace it with kefir. I ended up consuming both.

In 2013, my left knee started to hurt. I had to stop long urban hikes and leg presses. I was becoming more inactive. And even after I posted that I was having too many conflicting health goals, I continued to create conflicting goals. More on that in the next post.

To make a long story short, my weight is now at 216, which is not overweight given my height, but is also not lean.

What is My Ideal Weight?

If I were to ask my body what it believes my ideal weight is, I’d get different answers. My shoulders, chest and legs, would say I look most muscular at 215. My abs might say 185. My face looks younger at 200 than 185. But right now only one vote counts and that is my left knee. After reading Framework for the Knee, I’m convinced I need to get my weight down to help my knee fully recover. The book states that for every extra pound you carry, the knee thinks it’s 5 to 7 pounds.

My goal is to lose 20 pounds and return to 195. Once my knee heals, I can decide if I want to stay there or go higher. Every other goal takes a back seat. Yesterday I entered a bet with three others. We are all going to lose 20 pounds. If I lose, I will be required to go 1 week without coffee. My body could use the break, so this is a win-win.

I consider myself in better health now than when I began this journey in 2008, but I’ve clearly been sidetracked. In my next post I will outline how I plan to lose the weight.

Next The Fat Loss Bet

Previous Step Out of the Paleo Echo Chamber