I’ve never been a fan of Assisted Pull Up Machines. From my 2012 post How I Improved My Chin-Ups:

When you get under one of these machines, if you start with a decent pull, the lifter slides upward almost effortlessly. In other words, the tension is reduced just when more muscle should be engaged. The lifter games the equipment with a fast start. They also ride down the negative, so their muscles are fresh to bounce up again.

The problem is momentum can be generated too easily with the Assisted Pull Up Machine. But as I learned this week, that doesn’t have to be the case. You can slow it down or you can REALLY SLOW it down.

Bill DeSimone of Congruent Exercise just posted a video of himself doing Ellington Darden’s 30/30/30 HIT workout. That is a 30 second negative followed by a 30 second positive and finishing with a 30 second negative. 90 seconds under load with almost no momentum. Watch the beginning of this video.

I had to try this out and I did this morning. Now I’m a believer. Before I was doing slow bodyweight chin ups combined with a static hold and a slow descent. Now I believe the Assisted Pull Up machine is better. I can target the same muscles in a more fluid manner while extending the time under load. I happen to be tall (6 foot 2.5 inch), so dropping down after hitting muscular failure from a chin-up bar was never a safety risk, but I could see how it could be for someone shorter. The machine would be safer option for reaching failure.

One of the old timers chatted me up after my set. He said he could never figure that machine out, so I talked him through a normal rep and then told him to slow it down. He followed my instructions and did a great job. After the set, he thanked me. Then he went back to his chest machine, only this time he moved the weight a lot slower. Finally someone in this Glitter Gym gets it! 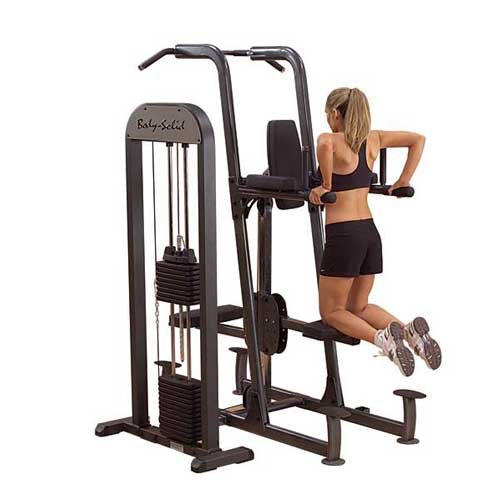 Body Solid Weight-Assist Knee Raise  – Looks like Amazon sells one. Bet the UPS driver would hate it if I ordered one. 😉 In the photo above – the pull up portion is on the opposite side of the woman. I plan to test the 30/30/30 with the dip on my next visit.

Next Answering 3 Fitness Questions About HIT and Running