This is a follow up to the post Stomach Woes Have Snuck Up On Me, which I put up almost 2 months ago. Rather than just tell you my story, I want to cover how I approached the problem, so if there is any wisdom here, others might benefit.

This is not medical advice. I tend to be anti-doctor until I’ve given up hope or a problem is too intense for me to ignore. My approach to this problem was to see if I could solve it myself. If I could make things better on my own, then I knew I was on the right path. If not, I would surrender and visit a doctor.

What Was the Cause?

My research led me to two candidates that seemed more likely than others as the cause of my stomach woes. First was slow digestion. The second was SIBO. If I had slow digestion, how could I get it back up to speed? If I had SIBO, could I take care of it on my own?

I took a 3-pronged approach to my hypothesis.

If you go down the rabbit hole of Internet research, you will find someone that got better or worse with just about every food out there. I decided to simplify the problem by removing the foods that I consumed far more than the average person.

Those being potatoes, carbonated water, and ice cream. There was one other food, but I’ll save that part of the story for the end.

Potatoes? Yep. I’ve been preaching the Potato Hack Diet for a long time now. Could eating 10+ pounds of cold boiled potatoes every week for 2 years cause an issue? Resistant starch is supposed to be good for the gut, but could it be feeding SIBO? The article Resistant Starch – Friend, Foe or Lover? was a detailed dive into the topic that left me uncertain. The only way I would know is if I took a break from potatoes.

I also removed those cans of lemon-lime flavored water, which I was knocking back about 3 times a day. I also ended my end-of-the-day ice cream treat. The only other dairy I eat regularly is cottage cheese. If removing the ice cream made things better, I could remove other dairy items, but I seriously doubt I would suddenly develop a dairy issue after thriving on dairy since birth.

I got digestive enzymes and ginger root capsules to help with digestion. In the event, it was SIBO I started taking oil of oregano drops.

I eat a late dinner. It helps me sleep better. I decided to follow the standard advice of eating hours before bed. I also started adding walks after meals, based upon the article Really? The Claim: Taking a Walk After a Meal Aids Digestion.

After one month, I couldn’t tell if the ideas above were helping as I would be fine for a few days and then have a relapse. There was a tiny voice in the back of my head whispering a word that I didn’t want to hear, but at the start of the 2nd month, I listened.

In my initial post on this topic, I mentioned that my stomach starts gurgling loudly when I drink black coffee first thing in the morning without food. Half & half helped a little.

Later I started drinking a mix of marshmallow root and slippery elm to coat my stomach before my morning coffee. When I went back to the herb store where I got the mix to buy more, I told the owner how the mix was working, because it let me drink coffee first thing in the morning with fewer stomach issues. She then said that maybe the coffee was trying to tell me something and that masking the symptoms might not be the best strategy.

She was probably right, but I didn’t want to hear the message.

A few weeks ago, I cut my coffee intake in half and I feel a lot better. Instead of 3 coffees a day, I started brewing three 1/2 cups of coffee with my Aeropress. Each time with food.

I wish it were ice cream or carbonated water or even potatoes, but it appears to be coffee. The good thing is a 50% reduction has solved 90% of the problem. My guess is reducing further would help more, but I’ll need to find that sweet spot.

So I doubt it was SIBO. It was likely all a stomach acid issue that was being aggravated by decades of high coffee intake that finally caught up with me.

The good news is I’ll be adding back potatoes next week. 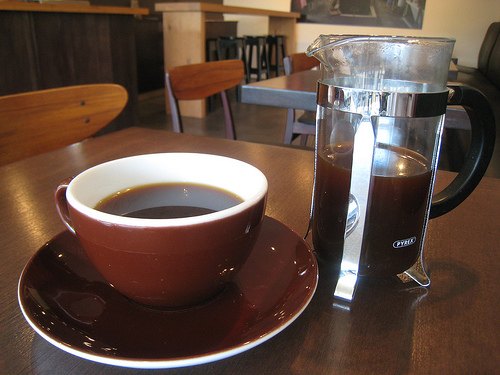 I won’t be drinking big cups of coffee like this anytime soon. More like 4 or 5 ounces cups for me.

Next An Offal Vegetarian