Last year I read The Black Swan. At times it was a difficult read, but it was outstanding. It’s clear to me now that I should have read the author’s previous book Fooled by Randomness first. In a word this book was stellar. 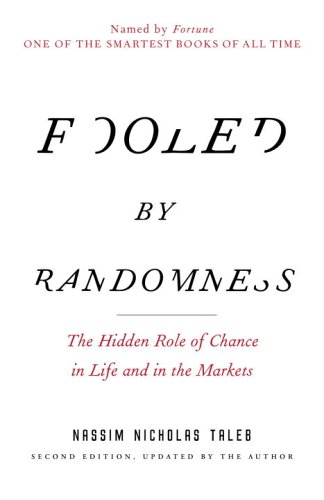 Fooled by Randomness: The Hidden Role of Chance in Life and in the Markets by Nassim Nicholas Taleb is one of the best books I’ve ever read. It covers several related topics that deal with randomness, expected value, human emotion, and to a lesser degree finance. In other words, he wrote this book for me.

One of the key concepts I got from this book is that humans undervalue the unexpected. And this fact has created opportunities for the author on Wall Street. He uses the term crisis hunting to mean seeking out undervalued outcomes with a high reward.

This morning I was reading about John Paulson in the article The Subprime Crisis is Just Starting by Daniel R. Amerman.

John Paulson saw the crisis that was coming in subprime mortgages, researched and educated himself on this area (which had not been his field of expertise), and he turned the crisis into a $3-$4 billion personal payday in 2007. If you’re not a hedge fund manager like Paulson, you may not have the tools that he used to turn a market crisis into personal billions. Thats OK, because Paulson didnt start with the tools either. He started with educating himself, learning about a new area, until he came up with a novel way to profit from disaster. A method that wasnt in the financial textbooks, and that he didnt find by reading a financial columnist in the paper.

In February 2006, I had just sold my house in San Diego, and based on my research I felt a major price correction was coming, so I went into the rental market. The real estate market didn’t make sense to me. I didn’t understand how people would pay back their exotic loans if home prices didn’t keep rising. And if the supply kept increasing while salaries remained constant, it meant this was impossible. To me, it seemed like a house of cards waiting to topple.

John Paulson not only saw what I saw, but he also hunted that crisis and figured out a way to profit from this undervalued expectation. Now he is a billionaire and the 165th richest man on the planet and I’m sitting in a 1200 square foot apartment in Bellevue, Washington. Meanwhile, numerous mortgage lenders, banks, home builders, and hedge funds have been fooled by randomness.

Next Picking a Real Estate Bottom