In the post Training to Failure or Training to Quit, I discussed the disagreement about training to failure that exists between my fitness mentors. Pavel and Arthur De Vany believe you shouldn’t train to failure, whereas Dr. Doug McGuff and the rest of the High-Intensity Training community believe you should. If you haven’t read the initial post, go do so now. I’ve now had three months to think about a way to reconcile this disagreement.

The target audience for Pavel is someone who needs to be at top performance at a moment’s notice. He works directly with law enforcement, the military, and in-season athletes. If you are in this group, going to total failure HIT style would clearly impair your performance. Power to the People (PTP) is designed in a way to recruit strength with minimal soreness. I did it for almost 10 years and found it did exactly that.

I credit Pavel for rescuing me from the high-rep, multiple set, lower weight nonsense that is peddled by most trainers. All that did was leave me sore with minimal strength gains. However, now that I’ve had time to think about it, I realize that I was never the target audience for his style of training. I was an office worker that wanted to gain muscle. Although I did gain muscle at first, whenever I tried to ramp us his program using the Russian Bear method, I’d injure myself. 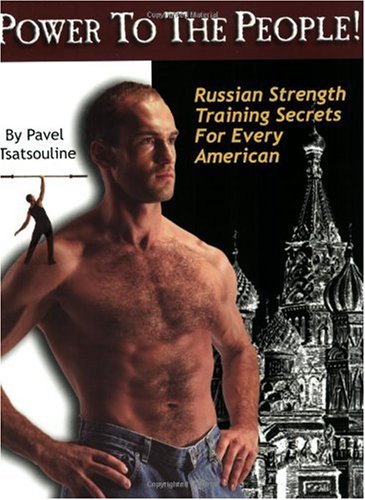 Power to the People! : Russian Strength Training Secrets for Every American by Pavel Tsatsouline

It makes sense that Pavel and De Vany would favor lifting plans that avoid going to failure. For Pavel, his clients need to be ready to fight or perform at a high level on a daily basis. De Vany is a student of evolutionary fitness and I can see how the threats of nature would need to be addressed at all times. Going to failure on a regular basis could make you more vulnerable in battles where you did not have time to recover. 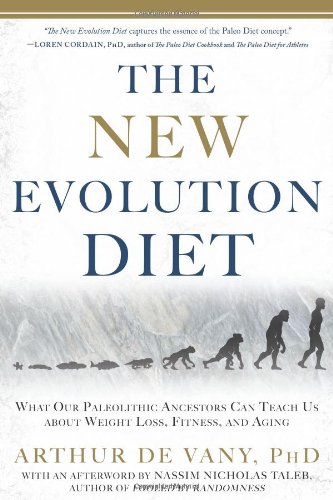 The New Evolution Diet: What Our Paleolithic Ancestors Can Teach Us about Weight Loss, Fitness, and Aging by Arthur De Vany

The High-Intensity Training crowd is clear about taking the muscles to total failure and then allowing time to recover as the optimal method for building muscle. I’ve read the science and experienced it first hand. It works. However, if I had to perform at a high level on a daily basis, I wouldn’t be doing this method of training. When I return from the gym, I’m toast. The next day I move in slow motion. By day three, I’m still below baseline performance. This is perfectly fine for me, as I push pixels. I would not want to train like this if I were a lifeguard.

Since my goal is to gain strength and muscle and couldn’t care less about day-to-day high-level performance, HIT works perfectly for me. I also couldn’t care less how many pounds I deadlift or bench. More muscle is my mission. Other metrics no longer concern me.

The real issue is determining if repeatedly going to failure sends a negative signal to the neural pathway. De Vany and Pavel believe this to be true. Repeatedly sending failure signals is a concern. Jim’s comment in the previous post got me thinking more about this.

From my point of view, it just looks too mentally exhausting to be able to continue for a prolonged period of time (e.g., five years). For me, this would outweigh any benefits over other protocols.

Other than to state that many people have trained for years on HIT, I didn’t have an answer for this concern. Then I listened to a 2009 interview between Jimmy Moore and Dr. Doug McGuff. Dr. McGuff explains the concept of going above and below the baseline. When we lift weights, our muscles breakdown and we temporarily go below the baseline as our body rebuilds the muscle. After recovery, we are stronger than before and now above baseline.

Now it may take four days to get back to baseline. Instead of immediately doing another HIT workout, Dr. McGuff mentioned that he may not train his clients for a full week, so that they spend additional time above baseline. In his interview on Conditioning Research, he said the same thing.

Keep your training frequency such that you experience more days above baseline than below baseline.

To be above baseline to me is a positive neurological signal of success. I think this would address the mental exhaustion concern Jim had. Pavel’s PTP sends the lifter below baseline for shorter, but more frequent periods. HIT combined with McGuff’s extended recovery goes deeper below baseline – followed by more days above baseline. 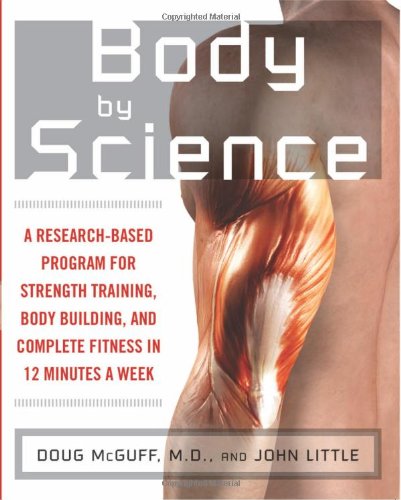 Body by Science: A Research Based Program to Get the Results You Want in 12 Minutes a Week by Dr. Doug McGuff and John Little

Confession time. I am heading right back into the gym every 5th day for another HIT workout. I am clearly spending more days below baseline than above baseline. This is intentional. I am weaning myself off the volume I used to do and the novelty of HIT is still exciting to me. Also, I suspect that I’ll see many of the gains from switching to this protocol in the first year. At that point, I’ll scale back to once a week lifting per Dr. McGuff’s advice. 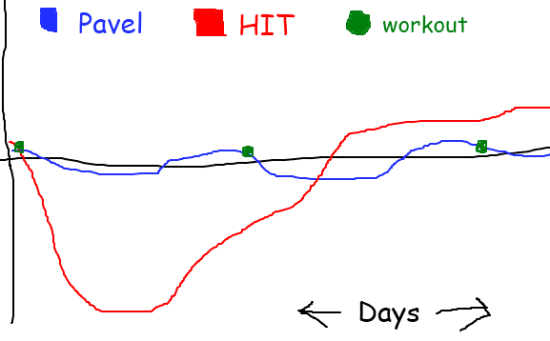 My highly artistic attempt at explaining PTP vs HIT and baseline. 😉

The above chart shows a week where the Pavel PTP lifter does 3 workouts, never to failure and the HIT lifter does one workout to failure. Both spend time above and below baseline, albeit at different intervals. The Pavel lifter never goes too far below the baseline and is ready for a high level of performance on a daily basis. The HIT lifter, who less concerned with day-to-day performance, goes well below the baseline and then (if they listen to Dr. McGuff) spends a few days above baseline before returning to the gym.

I’m here to make the peace between both sides. I think both sides are right and it just depends upon who you are and where you are at in your fitness journey as to which protocol is right for you. Because I just care about gaining muscle and have no need to demonstrate a high level of strength on daily basis, HIT is right for me. If I were in law enforcement, active military, emergency response, or an in-season athlete, I’d favor Pavel’s PTP.