In earlier posts, I covered how cold weather exposure may trigger a fat loss response by activating brown adipose tissue (BAT). It may also lead to muscle gains. There isn’t a lot of information on this, but the theory is that cold temperature exposure results in higher levels of testosterone.

Anyway, Charlie recommends finishing off your shower with cold water. Allow the cold water to flow from the solar plexus onto the genitals. The belief was that these areas contain the highest concentration of nerve endings, therefore, the cold would stimulate the nerves which in turn strengthened the entire nervous system. “Stimulate” is certainly the operative word here. I can attest to its effect since I’ve been doing this for some time now. It takes a little getting use to but it sure is an eye opener!

Now Charles Atlas isn’t exactly someone I’d listen to, especially if it means freezing the twig and berries. However, Nelson Montana is a smart guy. Maybe there is a seed of truth to this? If there is then I’ll need more evidence and from real scientists, not Charles Atlas. 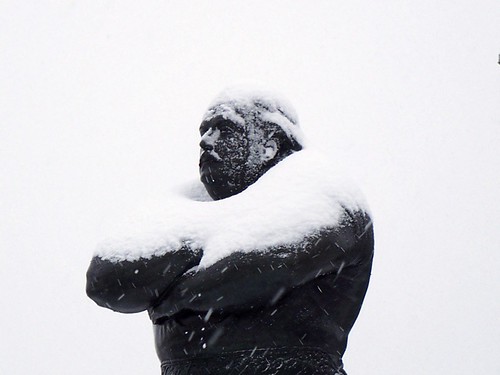 This weekend I stumbled on evidence that may support the frozen junk theory. And ironically it comes from an INeedCoffee contributor. Jose Antonio, Ph.D. wrote How Functional Coffee Can Help You Attain Fitness and Weight Loss for the coffee site. In 2007, he wrote Cold Weather Good for Testosterone? for Muscular Development.

Total testosterone (T) peaked in the months of October and November, with a smaller peak in February. June levels of total T were the lowest. Moreover, free T peaked in December and reached a low point in August. The subjects waist-to-hip ratio followed the pattern for T. That is, they were highest when T was lowest. So, subjects were perhaps leaner during the cold winter months, which, by the way, also have the fewest hours of sunlight. Furthermore, the variations in hormone levels were quite large (31 percent difference between peaks and nadirs).

The study he cited is Seasonal Variation of Testosterone and Waist to Hip Ratio in Men: The Troms Study. After reviewing it, they referenced a study that shows the body is more likely to use fat for fuel during winter months. Why though? I have a few thoughts.

It is all coming full circle. Our genes are able to switch into accessing stored body fat if they believe the food sources are getting scarce due to colder weather. This is the exact opposite of how post-Agriculture man lives. We are now able to eat constantly with no exercise demands during the winter months. When modern man emerges from his toasty warm cave (flat screen TV and kegerator), instead of having low body fat and high testosterone levels, he has the exact opposite.

I don’t know if it necessary to aim your shower cold water at Little Elvis. Arms, legs and shoulder blades are probably good enough. At least I hope so. 🙂