Flavor Signaling and The Shangri-La Diet

I just read a fascinating diet book that approaches fat loss by adjusting the body’s fat set point by weakening the signal between calories and flavor. 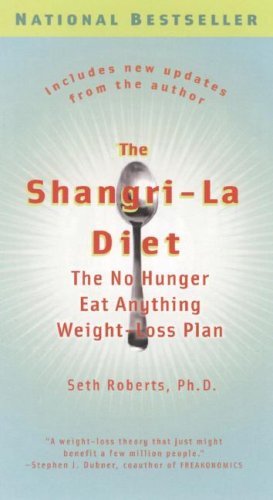 The Shangri-La Diet: The No Hunger Eat Anything Weight-Loss Plan is by Seth Roberts.

This book provides an alternate hypothesis to reversing obesity, but it doesn’t contradict anything that I’ve learned about nutrition over the past few years. The Shangri-La Diet offers an explanation, which if true, provides a framework for understanding why diets succeed or fail despite identical macronutrient ratios. This diet doesn’t restrict calories or carbohydrates but instead uses the goal of adjusting the body’s fat point by reducing the flavor signal. Note that I use the term Flavor Signaling to describe what is going on, even though that term isn’t used in the book. In short, flavors that are stronger, more frequent, and more predictable will push the body’s fat setpoint higher. Those that do the opposite, will lower the fat set point.

How The Diet Works

The diet is amazingly simple and could easily be tried by anyone, even those following another diet. At least an hour before one of your meals, consume unflavored sugar water and/or Extra Light Olive Oil. Both of these foods are flavorless and provide calories. The author and many of his blog followers have lost and more importantly kept off the weight using this simple technique. Although it sounds too good to be true, once you think about it from an evolutionary standpoint it makes perfect sense.

Paleo man didn’t have a 24-hour grocery store and McDonalds. Nature varied the amount and variety of food sources. Some regions and some seasons provided more abundant and predictable food sources. For survival purposes, there would have been an evolutionary advantage to increasing the body’s fat setpoint during those times.

When food is more plentiful, we choose the food with the strongest flavor. When it is not, we take what we can get. Simply having tasty food around would have provided the hormonal signals to store more fat. The more frequently a particular food was consumed, the stronger that association. If a food was rarely consumed, then that flavor would not send the same signal to increase the setpoint, as that could be an indication of scarce resources.

Back To The Present

In modern times, we not only have access to endless amounts of food, but we tend to eat the same foods over and over. This strengthens the Flavor Signal. You feed your body a Big Mac and Pepsi every day and even though the meal may meet a normal caloric requirement, permanent fat loss rarely occurs because the fat setpoint doesn’t come down.

One of the things I’ve noticed about people with chronic weight issues is that they tend to be picky eaters. The common perception is of the fat guy who eats everything in sight. I don’t see that. The people who I see that eat the most diverse diets, tend to be thinner. Those with predictably limited diets, tend to have trouble losing weight or keeping it off when they are successful.

We have a huge problem with obesity in the poor. Poor people consume a lot of fast food and processed food. Seth Roberts calls these “ditto foods“. Foods that taste identical every time you eat them are ditto foods. They send a flavor signal of abundance and are quite addicting.

Why Do So Many Diets Fail?

One of the things that I tend to focus on when researching things is looking for points of failure. This is why I bash personal trainers who are blinded by survivorship bias. I’m more interested in learning why something failed than defending why something worked. Lots of diets work. They tend to work for a while and then the dieter gains the weight back. Usually, the dieter is blamed for a lack of discipline, but the failure rates are too high for such a simple explanation. Addressing the set point might be the answer.

Here are some takeaway lessons one can use from this book to improve their diet.

If I were overweight, I would have held off on this review and tried the protocol. Then I would have included my thoughts on the book along with my own results. However, I’m already lean and weight stable so I can’t test it. Even if this diet doesn’t work for someone, I really like it, because besides making sense it is a low cost and low effort.

My biggest tips for losing fat have been to cut the sugar and wheat. Sugar is obvious, but The Shangri-La Diet also strongly supports my case against wheat. It is processed and fast digesting. Also, unless you are always varying the type of bread, it can mimic a Ditto Food.

After reading this book, I did some more research and learned that this avenue of obesity research is gaining popularity. Additional resources include The Deconditioning Diet on Getting Stronger and the 8 part series Food Reward: a Dominant Factor in Obesity (Part 2, 3, 4, 5, 6, 7, 8) on Whole Health Source.

Next Half the Ideas in this Blog Are Probably Wrong