Lower Risk Alternatives to the Barbell Back Squat

My previous post I No Longer Give a Squat About the Squat, I outlined why I no longer perform the barbell back squat. This post will list the exercises I’ve used to replace weight lifting’s most sacred exercise. Before I begin, I want to clarify that I am not a personal trainer and the only client I’ve trained has been myself. I approach fitness in the same manner that I approach investing, which is a risk versus reward model. The squat without a doubt can provide huge rewards, but it is my opinion that the risk of injury increases over time.

To have strong legs, I do not believe it is necessary to back squat.

A Humbling Lesson From Pete Egoscue That I Ignored

During my squat heydays around 2001 – 2004, I was dealing with frequent back pain. It was during this time that I starting reading Pete Egoscue. His books had a series of exercises used to correct alignment problems. One of the exercises in the book was an Air Bench. This is also called a Wall Sit in the Hillfit: Strength program and Wall Squat elsewhere. Read How To Do a Wall Squat for an exercise explanation.

What I learned very quickly is just how difficult this simple exercise can be. Even though I was squatting more than bodyweight for reps, my legs would burn greater on a 60 second Wall Squat. At the time I didn’t understand why the Wall Squat seemed to produce deeper muscle fatigue. I was still in the Pavel school then – which places greater importance on demonstrating strength without going to failure. But I was a good comrade, so I stopped doing the Wall Squat to failure and returned to my free weights.

The lesson I should have walked away with then was that the number of pounds lifted is a less important metric than intensity, which is more difficult to quantify. When I did the Wall Squats my leg muscles felt more taxed. When I did the back squats, my entire body felt destroyed, including at times, my back.

After I read the book Body By Science by McGuff and Little, I understood why the Wall Squat produced such a deep level of fatigue rapidly. By placing the body into a static hold, at first, the slow-twitch muscle fibers are engaged. They are fatigue resistant and recover quickly. These are the dominant fibers used in endurance sports. If the slow-twitch muscles become fatigued then the more energy-expensive fast-twitch muscle fibers are engaged. They have a lot more power, but they fatigue much faster and take longer to recover.

Trust me when I say that a single Wall Squat taken to total failure can produce as much muscular fatigue as a 20-mile hike. Not every person will want to train to failure. I covered this in the post Training to Failure or Training to Quit Part 2. Because I have the freedom to have down days post-workout, going to failure works for me. If you are an in-season athlete, law enforcement, or military and need to be near peak performance on a daily basis, then training to failure may not be wise. 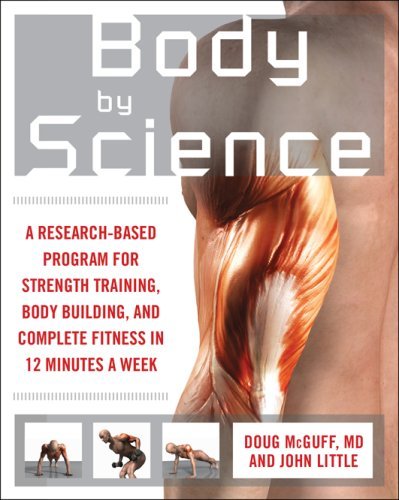 Body by Science by Doug McGuff and John Little

When I engage in an exercise I want the ability to work to failure at ANY point during the repetition safely. Back to the Wall Squat. The worst-case safety scenario for that movement is my legs completely give out and I’m forced to lower my body into a sitting position. Because I can safely hit failure without the risk of injury, I can focus completely on generating more intensity.

You can’t do that with the Barbell Back Squat. When you begin a descent, you need to know you have enough strength left in the movement at any time to stand up and rack the weights. Exercising to failure is not an option with the squat. You’ll hurt yourself. Because you can’t safely exercise to failure with a barbell back squat, the intensity is replaced with an increase in volume. That might be great for your legs, but in my opinion, is subjecting your back and spine to unnecessary stress.

Here are the exercises that I have used to replace the barbell back squat.

Because I follow High-Intensity Training, I only do one set to failure once every 5-7 days. I have more leg strength now than when I was back squatting and none of the pain.

Next Heal Your Headache: The 1-2-3 Program for Taking Charge of Your Pain

Previous I No Longer Give a Squat About The Squat