The hot topic on Paleo blogs these days is “the return to carbohydrates”. There is a slow but growing trend of those following a Paleo diet to abandon the low-carb approach to one with moderate carb intake. Although my initial approach to a more Paleolithic diet was low-carb, I began dancing with carbohydrates early last summer. At the end of the summer of 2010, I started a one year experiment of eating seasonally. Before the safe starch debate even began, I had already concluded a year experiment of eating seasonally, which included eating safe starches. Safe starches are sweet potatoes, yams, white potatoes, taro root and white rice.

My idea was to vary carbohydrate levels based upon the length of daylight. More daylight, more carbs. Less daylight, less carbs. It was a fun experiment and you can read my conclusions in the post Concluding Seasonal Strategies For Fitness and Nutrition. At the end of the experiment I switched from seasonally adjusting my carbohydrate levels to adjusting them based upon my activity level. I outlined that strategy in the post The Paleo/HIT Cyclical Approach to Fitness and Nutrition.

What Did I Learn? 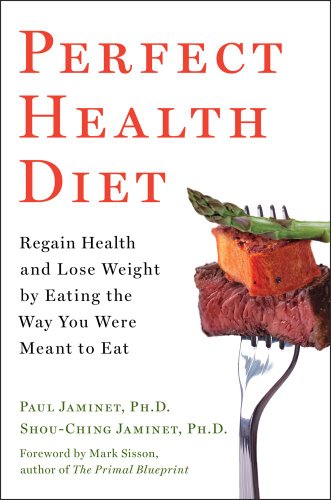 Perfect Health Diet: Regain Health and Lose Weight by Eating the Way You Were Meant to Eat by Paul Jaminet

Was it Ever About the Carbs?

Did I lean out because I reduced my carb intake or was it something else? Was it from eliminating unsafe starches such as bread? Maybe it was that I started cooking all my own meals? My year long experiment with safe starches had planted a seed of doubt that carbohydrates were the cause. I read a lot of nutrition blogs and I listened to numerous podcasts. For every expert stating carbs were bad, there is another standing by to rip that argument to shreds. At times it feels like watching a tennis match that never ends.

Last year I was exposed to the Food Reward theory for obesity in the book The Shangri-La Diet, the site Getting Stronger and the series on Whole Health Source. From my review of the Seth Roberts book:

This book provides an alternate hypothesis to reversing obesity, but it doesn’t contradict anything that Ive learned about nutrition over the past few years. The Shangri-La Diet offers an explanation, which if true, provides a framework for understanding why diets succeed or fail despite identical macro-nutrient ratios. This diet doesn’t restrict calories or carbohydrates, but instead uses a goal of adjusting the body’s fat point by reducing the flavor signal. Note that I use the term Flavor Signaling to describe what is going on, even though that term isn’t used in the book. In short, flavors that are stronger, more frequent and more predictable will push the body’s fat set point higher. Those that do the opposite, will lower the fat set point.

This week Free The Animal posted Synthesis: Low-Carb and Food Reward/Palatability, and Why Calories Count. It is a brilliant post that connects the dots between low-carb Paleo and Food Reward. Go read it and the comments. The take away message of the article is that magic of low carb dieting is reduced Food Reward. Lower carbohydrate foods tend to have lower food reward. Less food reward results in fewer calories consumed to achieve a similar state of fullness. However, a low-carb dieter could stall their fat loss by consuming low-carb foods with high food reward. And adding back in safe starches, which tend to have lower Food Reward could result in resumed fat loss for someone stalled following a strict low-carb diet.

Leaving the Church of Low Carb?

What I currently eat would still be considered low-carb by most. But for the past year or two, I haven’t identified myself as low-carb. My diet today can best be described as a cyclical carbohydrate approach to Paleo plus Weston Price. Yesterday I was moderate carbs. Today I’m in ketosis. It seems to be working for me, but I’ll continue to experiment.