FireInABottle recently put out another outstanding post about the metabolic destruction that industrialized seed oil has inflicted upon the world.

Humans and Hibernating Mammals React to The Same Amount of Dietary Linoleic Acid in the Same Way. By Becoming Torpid.

In the post, we learn that mammals that enter hibernation do so with higher levels of Linoleic Acid. When LA levels rise, it downregulates metabolism and allows these animals to go into hibernation. Humans are not hibernating animals, yet with the rise of seed oils, the percentage of our body fat that is LA is now matching the mammalian metabolism of hibernating animals. This wasn’t true a few generations ago.

No wonder society has gotten so obese and lethargic.

As some readers may recall, starting in 2013, I became strict about removing PUFA from my diet. I stopped consuming any food cooked in seed oil. I avoided chicken and pork. No processed foods. If I went to a restaurant, I ordered the minimally cooked** option (soups, curries, salads). I even stopped consuming nuts, which probably was not necessary, but I was on a mission. My body temp gradually increased 96.9 to 98.5, which I maintain today.

** dishes that are cooked in liquid are safer choices, as they are far less likely to require cooking oil during preparation.

Not only am I leaner today, but I feel like I am leaner with less effort. My metabolism is supporting me and not holding me back. This is not a common situation for most people that lose weight. When you lose weight, metabolism drops. How much, if any, does it recover is a topic that is still being debated and researched.

Before I declared victory on my fat loss, I waited enough time to allow my setpoint to drop 1/2 pound per week. So although I lost weight faster than that, I had seen too many cases of people that lost weight quickly and then regained it.

Prior to my Potato Diet success, I had already massively reduced the PUFA in my diet. That likely supported my metabolic rate as I went into caloric restriction. This is something most dieters are not thinking about. Maybe it is time they did.

Most of the writing I have seen over the years advises replacing PUFA with Saturated Fat. This is a viable path, but I didn’t choose it for myself for a few reasons.

First, many sources of Saturated Fat also have a fair amount of PUFA. And as I read somewhere on the FireInABottle site, if the animal you eat is eating lots of PUFA, then you are getting your PUFA indirectly. That makes total sense and it is something usually outside your control. Firebrand Meats looks to be a possible solution to this problem.

Second, although the low-carb community believes Saturated Fat is healthy, I’m less certain. It might be. I do know that when I reduced my SF intake, my blood work became optimal. See Lipid Levels After Going 90% Pesco-Vegan.

The path I took to purge the PUFA was a low-fat, high-volume, higher protein diet mostly plant-based. Starchy root vegetables, legumes, and unprocessed non-gluten grains. By volume, I mean foods that physically take up a lot of space at a lower-calorie level. See the book Volumetrics for a detailed explanation. 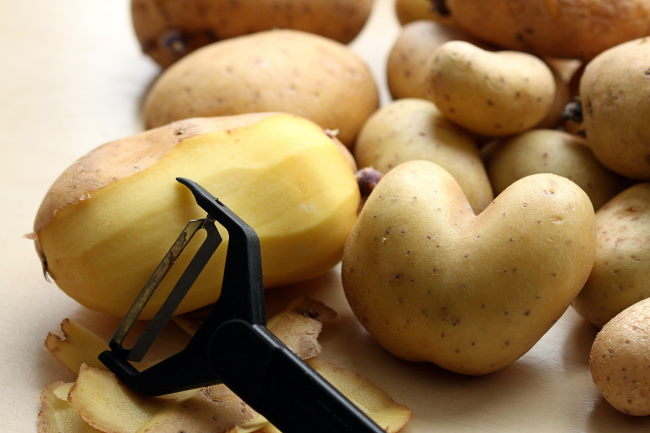 The boiled (and cooled) potato is not only the #1 food for permanent fat loss, it is an excellent way to displace PUFA. Photo by Peter Schad.

Briefly, I’ll mention the Ray Peat path to displacing PUFA. In addition to greatly reducing PUFA meat sources and seed oil, that group favors fructose sources of carbohydrates over starchy vegetables. I found I had a stronger appetite and gained weight when I went down that path, but others have succeeded with his diet. Decide what is best for you. Experiment. The important thing is to reduce PUFA.

This is my n=1 story. I escaped decades of PUFA intake, lost weight, and increased my body temperature by following a low-fat healthy carb diet.

Today I cook primarily via boiling, steaming, and pressure cooking. This eliminates the need for cooking oil. Most of my meals are prepared at home. When it comes to PUFA elimination in modern society, moderation is a losing strategy.

You too can exit hibernation and return to a healthy human metabolism. It will take discipline and patience though. It could take several months or a few years. Stick with it. It is worth the effort.

Next Of Course, I Auto-Delete Old Tweets